Discover the masterpieces of the DIA Collection through a leisure walking tour in Downtown Northville with the interactive map. Remember to practice the recommended safety precautions and social-distancing rules. Enjoy the incredible art!

Get notified through our email newsletter>> on our upcoming education programs related to the DIA Inside | Out program. 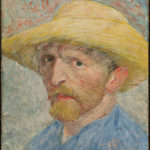 Vincent produced over 35 self-portraits, the majority completed in Paris between 1886 and 1888. He was short of money and struggled to find models, so “I purposely bought a good enough mirror to work from myself, for want of a model.” While in Paris, Vincent experimented with new ideas about color and technique, shifting from a darker palette to one influenced by Impressionism with bright colors and Pointillism with shorter brushstrokes. He would soon develop his own freer form of expression to match his nature, using colors primarily to convey particular moods and character.

‘People say – and I’m quite willing to believe it – that it’s difficult to know oneself – but it’s not easy to paint oneself either.’ – Vincent van Gogh

Vincent’s personality can be found in each self-portrait. In the summer of 1887, when this portrait was created, his mood was relatively a happy one, and he portrayed himself with an almost light-hearted appearance. He loved the color yellow and his yellow straw hat with simple clothes befitted his self-image as a working man’s artist.

Although the artist has not been determined, the viewer is able to learn about the sitter through his elaborate dress and sword, coat of arms*, and Latin inscription, which translates as “Picture of William Brereton, a soldier, who founded this house in his 28th year.” Sir William Brereton (1550-1631) was knighted in 1588 and served in the British Parliament between 1597 and 1622.

*The coat of arms is a bold, simple and symbolic design first used to establish identity of individuals who participated in warfare at a time when many could not read. This heraldic device, painted on a soldier’s “arms,” banner, flag or shields, evolved to denote family descent, adoption, alliance, property ownership, and profession. 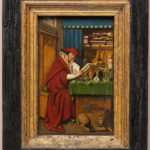 Delicate and intricate in its execution and rich in its symbolism, this small panel painting attributed to the workshop of Jan van Eyck depicts Saint Jerome, the fourth-century translator of the Bible, reading in his study. According to legend, Jerome extracted a thorn from a lion’s paw.

The books and other objects seen here relate to the saint’s intellectual pursuits and take on symbolic meanings. The hourglass is traditionally equated with the passage of time and human mortality. The glass bottle is undisturbed by the light passing through it just as the virginity of Mary was undisturbed by the Holy Spirit when she conceived Jesus. The jar labeled tyriaca (an antidote for snakebite) surmounted by a pomegranate (a symbol of the resurrection) refers to Christ as the savior of the world. Based on the inscription on the folded letter on the table, it has been suggested that the figure of Saint Jerome is a disguised portrait of Cardinal Niccolò Albergati.

Influential Flemish painter Jan van Eyck employed workshop assistants who made exact copies, variations and pastiches* of his completed paintings that contributed to the artist’s recognition throughout Europe. John Everett Millais, artist of #4 Leisure Hours, was an artist who drew inspiration from Jan van Eyck’s work.

*Pastiche is an artwork created by an artist that imitates the style of another artists. 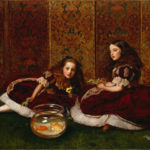 Anne and Marion Pender were the daughters of Sir John Pender, a wealthy textile merchant from Glasgow, England. The girls’ identical red velvet gowns and plush surroundings convey their affluence and proper Victorian society upbringing, yet one may feel that they have been placed on display much like the two fish in the bowl before them.

In 1948, while a young student at the Royal Academy in London, John Everett Millais co-founded the Pre-Raphaelite Brotherhood emphasizing a style of painting characterized by Romantic and Medieval themes with moral undertones, bright colors, and close-knit, detailed compositions over the classicizing style taught at the academy. However, by the mid-1850s, Millais was moving away from the Pre-Raphaelite style to develop a new form of realism in his art. Leisure Hours was painted a year after he was elected to be a full member of the Royal Academy.

Stay Connected with Us