The Art of Jeff Von Buskirk 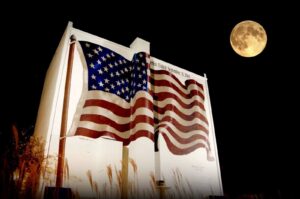 After the terrorist attacks of September 11, 2001, Inge Zayti, the late founder and owner of the Marquis Theatre, commissioned the painting of a 30′ x 45′ mural of the U.S. flag. Using classic mural technique, artist Jeff Von Buskirk created an internationally acclaimed artwork and one of Northville Michigan’s most recognizable and iconic landmarks in 2002.
Restored through a community-wide effort in 2014, the mural, titled with the words, “America United September 11, 2001,” honors the memory of 9/11 and reflects the community and the nation coming together, then, and now.
The community is invited to learn about the story of the flag, which is globally recognized on the Memorials Registry at the 9/11 Memorial & Museum in New York, and reflect on the 20th anniversary of 9/11. 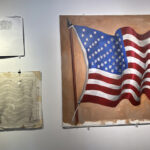 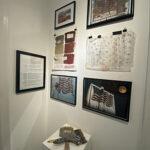 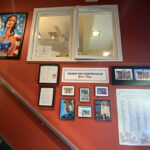 Meet Jeff Von Buskirk as he discusses his mural as well as artists in the exhibition West of Center: Art that Pushes Boundaries.

Jeff Von Buskirk is an established artist from the Detroit. He is currently doing cover art and pin-ups for comics including Staunch Ambition, and Big Blue Comics and focusing on his own graphic novel, commissions and fine art pieces. His past illustration work has appeared in fashion magazines, apps and video games. His traditional artwork has been installed in venues worldwide including Marriot Hotels and Sotheby’s and featured in shows and museums such as MOCAD. His mural work includes a nationally registered 9/11 memorial.
Live @ 5 Reception: October 23, 5 – 8 pm
Tickets and More Information Available Soon
Jeff will be creating an interactive mural for guests to paint.